It seems like the group is trying to compensate the last four years since their debut, South Korean boyband, DGNA (DaeGukNamAh, The BOSS) spent one whole week in Malaysia for a promotion, including three-days fanmeetings, interview sessions, 8TV NiteLive appearance as well as a special celebration party with the fans. Debuted in 2010 in Korea, and actively promoting in Japan for the last two years, the group recently made a Korean comeback in January 2014 with the album "Chapter II", and their title song, "Why Goodbye". Comprising of five good-looking members Mika, Karam, Hyunmin, Injun and Jay, they arrived in Malaysia on the 17th of June, being welcomed by a handful of screaming fans at the airport which obviously brought them to surprise. Following the arrival, DGNA had their press conference on the 18th June at the Neway KTV. Read the interview here.

On Friday the 20th, DGNA kicked off their promotional showcase with the first fanmeeting at Seremban Prima, Negeri Sembilan. Masters (fancub name for DGNA) have been gathering at the venue as early as 10 in the morning even though the event will start at 3pm. Dorkistic crews ourselves have been there at 12pm since we were collaborating with the fanclub, DGNA Malaysia to distribute food support and fankit to the fans. At 1pm, the passes collection booth is opened, as well as CD booth, where the fans can get DGNA CDs for the autograph session. While waiting for the showcase to start, the organiser had a giveaway session and the fans get to receive goodie bags from the sponsors (Hi Style, KCC Paint, Sky Dining, UMobile, Seremban Prima etc). DGNA started off the showcase by performing “We Are Together” which is the third track from their second album "Chapter 2". As expected from a group of five talented guys; Mika, Karam, Hyunmin, Injun and Jay ended their first performance without any mistake and received loud cheers from the crowd. Below are some of the questions that being asked during the interview session: Q:

What is your favorite Malaysian food?
Jay: Bak kut teh! I really like bak kut teh. It’s so delicious.
Hyunmin: Satay! Chicken satay.
Jay: oh…and that Malaysian bingsu…kacang? Kacang?
Hyunmin: ais kacang! I like… Ice bak kut teh!
MC: No! You can’t eat bak kut teh with ice!
Hyunmin: oh, I’m sorry. (kekeke)

Is there any Malay words that you have learnt?
Jay: Kamu sangat cantik! (you’re pretty)
Karam: Saya nak kencing. ( I want to pee)

Karam’s “saya nak kencing” has became a joke for the fans who came to the showcase. Even though the sentence might be quite impolite to be said in public but considered it as a joke, Karam managed to crack up the crowd. Then, they get back on stage to perform What Are You before having a fans interaction session with five lucky Masters being brought on stage. It was a fun session as the boys played the game of charade with their partner, trying hard to give hints, even lying down on the floor just to win the game. After the photo session with the fans, they were back on stage to perform New Boyz from their first album Awake, and they ended up the stage with their comeback song Why Goodbye. The fans get to go on stage for group photo session and also autograph session before the event ended at 5pm. 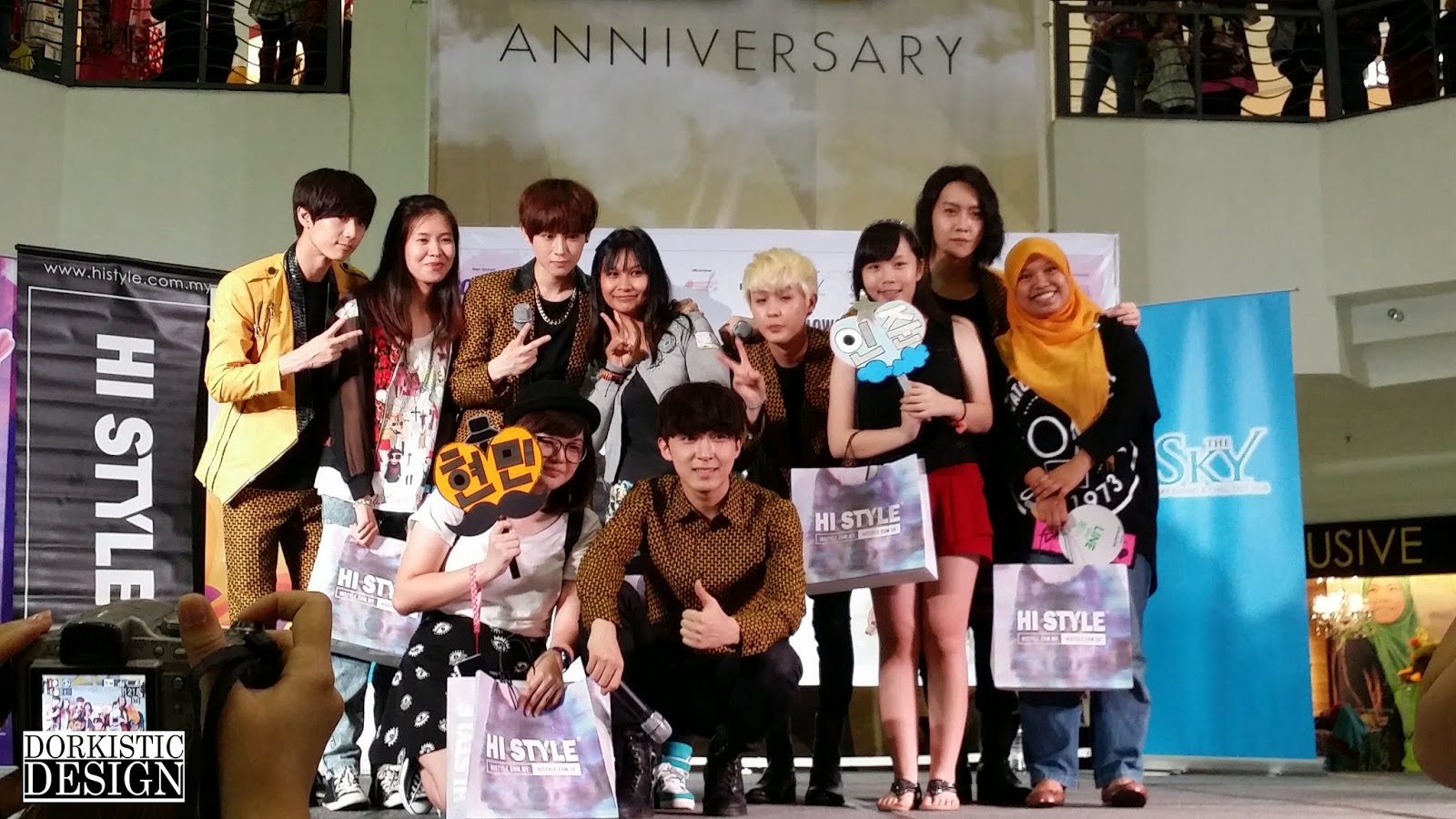 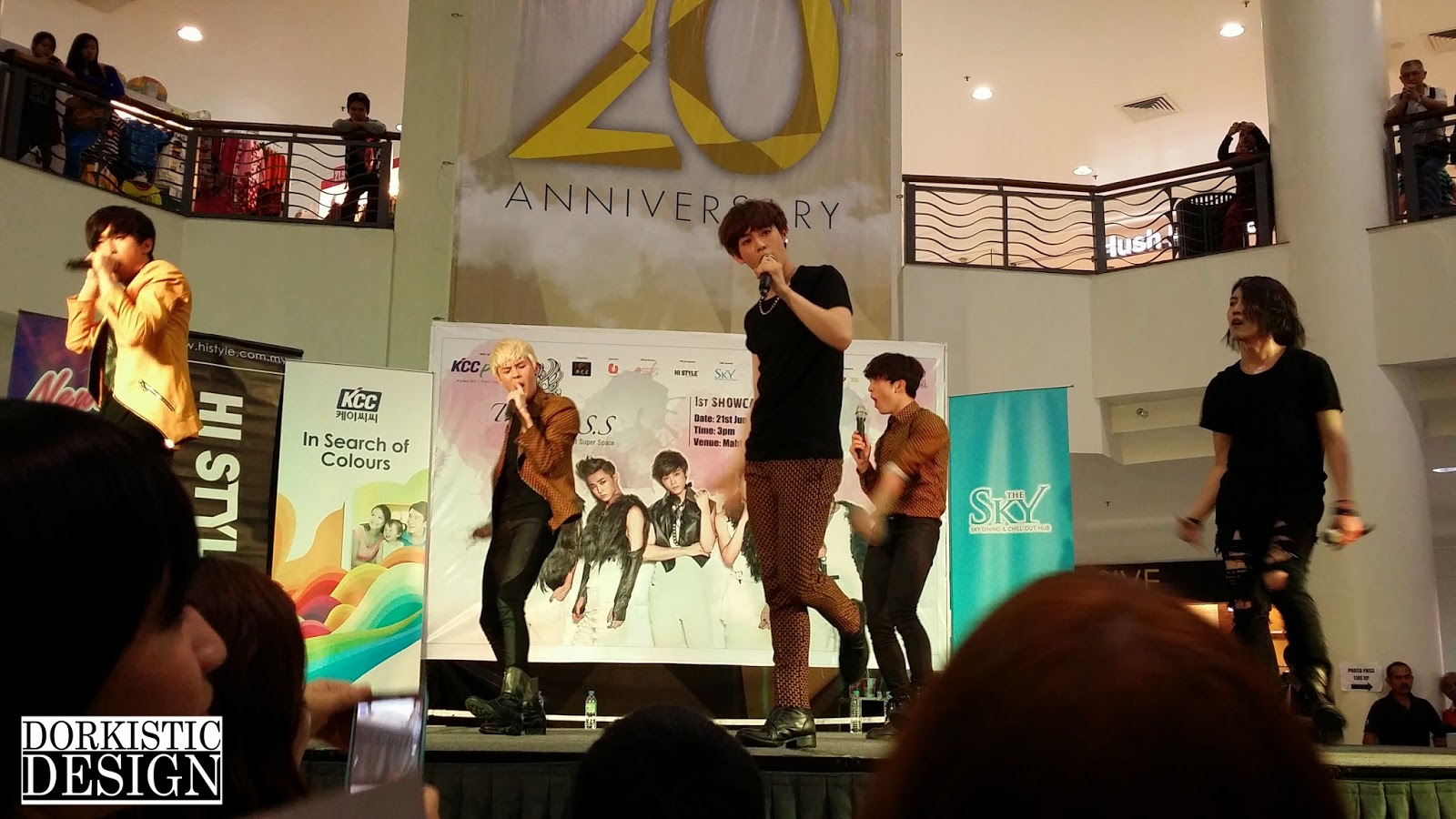 Following the close and intimate showcase session with around 500 fans at Seremban, DGNA came to Malacca on the 21st of June at Melaka Parade for their Day-2 Showcase. The fans came as early as 8 in the morning just to secure the best spot to watch the five boys showing off their live-singing ability. Despite the limited area of the venue, the fans were all gathered around, and at 1pm, the CDs were all sold out for the autograph session, same goes with our food support and fankits. Again this time, we were joined by our friends from Japan, Thailand, Taiwan and also Singapore who came all the way to support DGNA. The long awaited DGNA appeared at 3pm and this time, they performed We Are Together, New Boyz, Why Goodbye, What Are You. To add with in the playlist, they sang Sad Story, where they were not dancing this time, but rather cherishing the moment by meeting the eyes of the fans while singing the song. What makes the event here special is that the international fans get to send messages to DGNA, expressing their support and love, and of course, wishes for them to come to their countries too. With that, DGNA responded by saying that they would like to go and visit other countries and will try their best to bring the best performance, as they hope to see their fans all over the world. After the photosession and autograph session, DGNA said goodbye and surprised the fans by going on stage and sang acapella version of Lady. 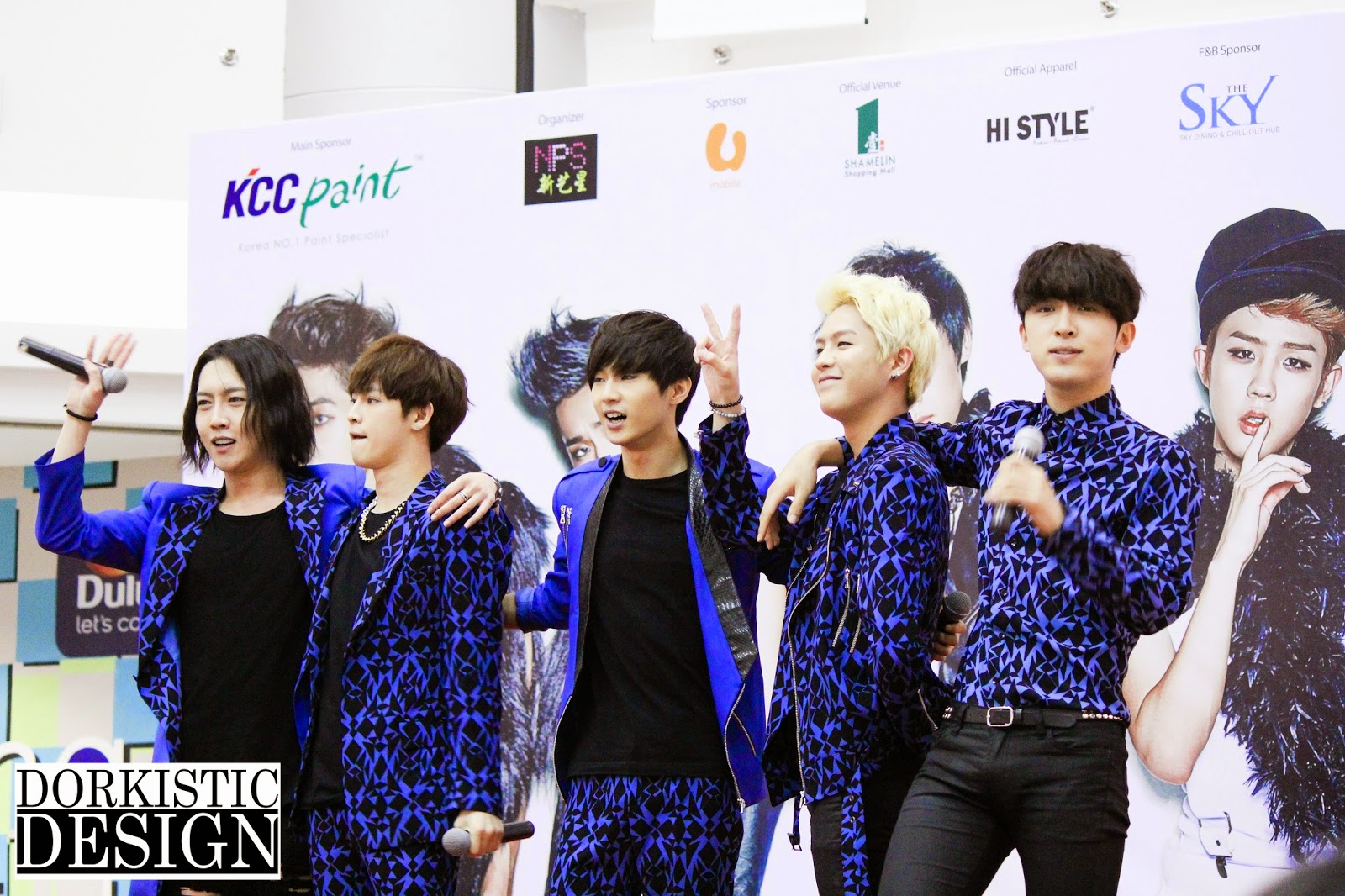 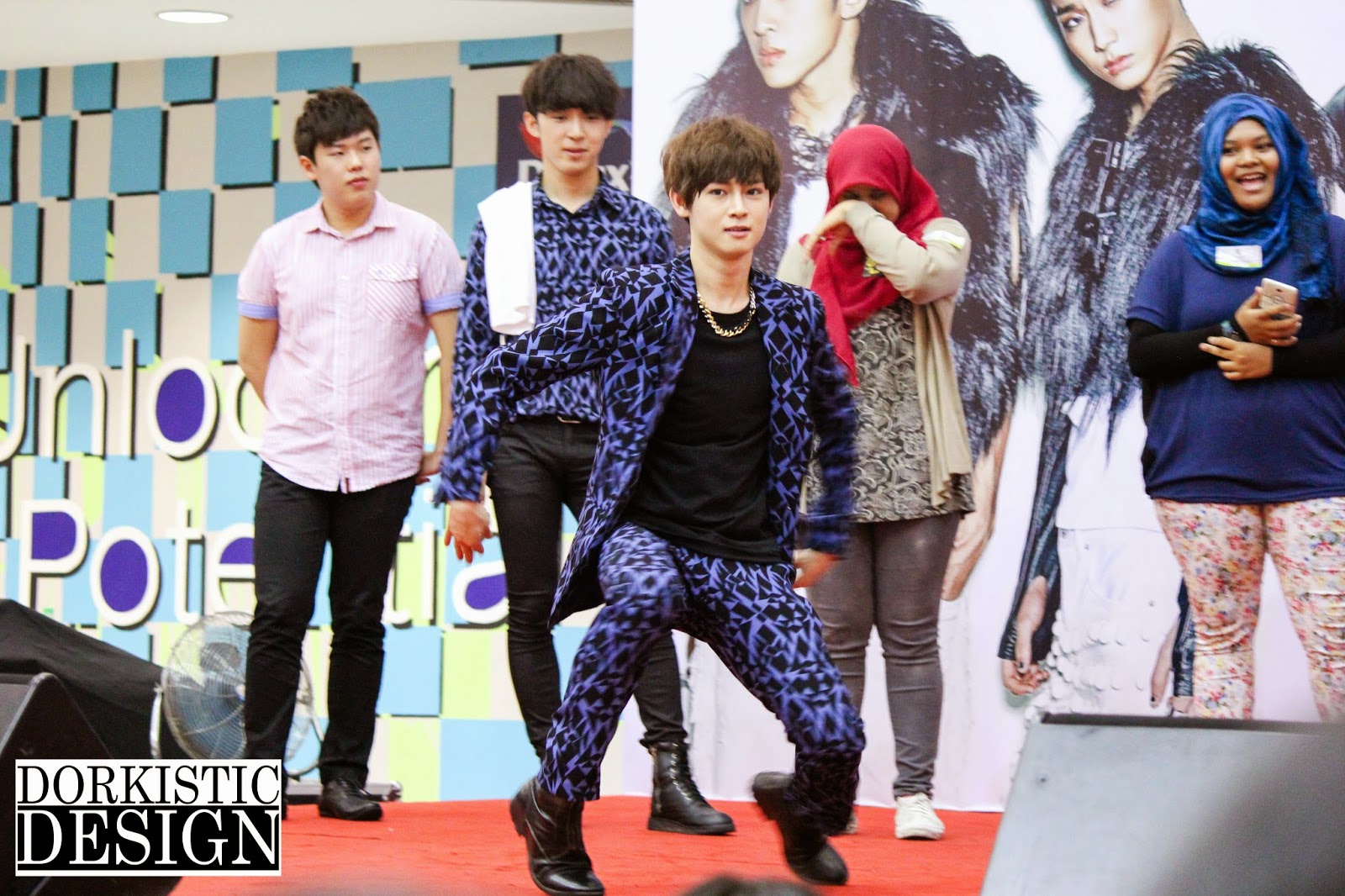 On the 22nd of June, DGNA made their last appearance at 1Shamelin, Kuala Lumpur for their last showcase event in Malaysia. Since it is a weekend, the crowed were doubled and seems like the boys were surprised with the number of fans coming for the last-day of their promotional tour. The CDs were sold out in just a few minutes, and there are many people getting their photopasses and VIP passes from the organizers. Starting the stage at 4pm, the boys, this time wearing blue outfit appeared on stage with the song We Are Together. They had the same activity with fans, which was the game of charade and during the short interview, once again the boys expressed their gratitude for the fans who came, especially who had been there since they arrived in Malaysia, and supporting them for all three events. They performed five songs which they performed in Malacca, and this time, they added one more song, just as what they hinted in Malacca, which is Lady. The song surely awed the audience, especially for those who just knew DGNA for the first time that day as Hyunmin hit the high notes in that song. They really showed that they are not a rookie group, but rather a group with enough experience to be known internationally, not only in Korea and Japan. To end their promotion, after their 1Shamelin event, they have a Celebration party with their special fans who have won the video contest organized by NPS. There were also Birthday Celebration for Mika, Karam and Hyunmin, sponsored by DGNA Malaysia.

A huge thanks to NewProStar Sdn. Bhd for inviting us to cover the event, and a special shoutout to DGNA Malaysia for a chance to collaborate for the fankit and food support. To all the sponsors, thank you for making us feels like home at all the venues. and to DGNA for coming to Malaysia!