[PREMADE] GRAB NOW BEFORE IT'S TOO LATE! 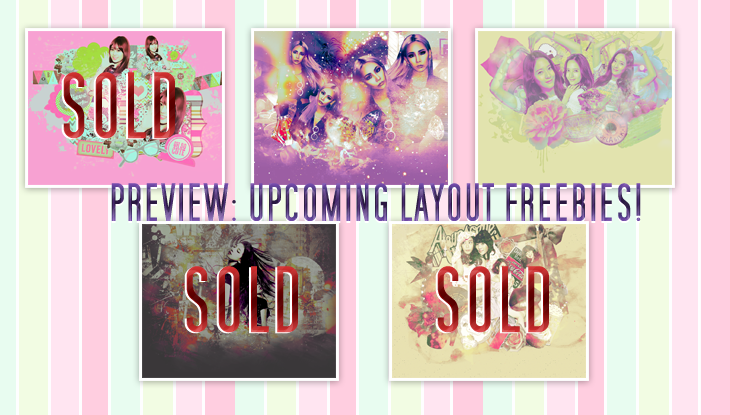 As you can see we have 5 layout premades, which you can grab on first come first serve basis. Once you bought it, it will be removed from the preview and won't be uploaded to our layout section. It is only USD0.50 with coding, and we will add your site name on it too! To order, just reply on the comment section with below's information:

Don't make me talk about that .nu domain! >.<
I wanted to see me use it too, but sadly that won't be possible: the registrar (an european one) f**ked up the registration royally and the domain doesn't work; to be more precise, the domain only works on the registrar's hosting nameservers. I've waited almost 2 weeks for the registrar to admit they screwed up, but they insist the host's nameservers were broken and that the domain is working fine - it's not, it has never worked. I know the NS work perfectly, I host other 2 domains on them, but the registrar denies their mistakes even when I show visual proof of it and won't give me a refund.
That teaches me to never try new registrars just because they're having a big promo; from now on, .nu registration = Namecheap. Nuff more said.

Thank you to you for making them and selling them at such a convenient price; I'm thinking....scratch that, I'm buying the last two if you're still selling.
Here's my second order.

Sending the $1 as soon as you confirm that the two designs are still for sale.
Thank you.

Forget my last comment, I noticed now the "giveway" ended on 10/22...too late to buy the remaing layouts. TT__TT