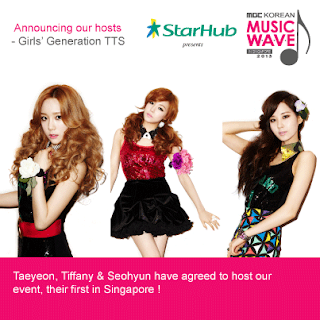 TaeTiSeo is the first official sub-unit of top South Korean girl group Girls’ Generation formed by S.M. Entertainment in 2012. The group’s name is made up of the first syllables of Taeyeon, Tiffany, and Seohyun and this name has the letters "T" and "S", which have distinct sounds, giving a strong vibe of the team and also lets the fans recognize the members instantly.

Their debut mini-album release “Twinkle” became an instant hit and was featured in many prominent charts. Since then, the trio has gained widespread popularity and recognition.

“Starhub Presents MBC Korean Music Wave” is an open-air mega concert to be held on November 16th at Gardens by the Bay featuring 13 of the hottest names in K-pop including SHINee, EXO, 2PM, 2AM, F.T. Island, B1A4, TeenTop, B.A.P, Kara, Sistar, Miss A, IU, and 4Minute.

Jointly organized by one of South Korea’s biggest broadcasters, Munhwa Broadcasting Corporation and Singapore-based Fatfish Entertainment, Music Wave is the largest ever multi-band K-pop concert and the first of its kind in Singapore. Taeyeon, Tiffany and Seohyun will hold the all-important role of being MCs for this 3-hour extravaganza.

“Music Wave is a celebration of K-pop music and we hope fans from around the region will come out in full-force to support the 74 performers on-stage”, said Taeyeon. Said Tiffany: “For one night only, K-pop fans can enjoy hit songs and cool moves from 13 acts, so there will be something for everyone.” Added Seo Hyun: “We hope the fans will support every single band, regardless of who their favourites are, as Music Wave is all about the K-pop family coming together.”

Super VIP packages for Music Wave has already been sold out, but tickets ranging from RM440 to RM960 can still be purchased online at Redtix and MP Travel now, or from Ticketcharge from 16 Oct onwards, so grab them today to avoid disappointment.