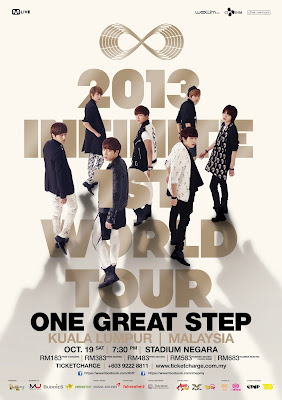 INFINITE is a Korean megastar band who is now at the very heart of the massive popularity of K-Pop. The seven male members (Sung Kyu, Dong Woo, Woo Hyun, Hoya, Sung Yeol, L, and Sung Jong) successfully debuted in June 2010 with their first mini album


Fans all around the world are drawn to INFINITE’s pitch-perfect live performances and their music, which distinguishes them from other K-POP artists. In 2012, Billboard.com chose ‘The Chaser’ as the No. 1 K-Pop Song of year and through an article dedicated to the band on their main page, identified INFINITE as a rising star who had shown the most growth in Korea and Japan.

INFINITE has always given their fans total satisfaction with powerful, eye-catching performances. This summer, Infinite celebrates their 3rd anniversary since exploding on the scene and takes their music to the world, starting in Seoul, Korea. Following this, “2013 INFINITE 1ST WORLD TOUR ‘ONE GREAT STEP’ IN KUALA LUMPUR” will be held on 19th October at Stadium Negara Kuala Lumpur. Their journey will continue through China and many more Asian countries and beyond, touring until the end of the year, performing in North America, South America, Europe, the Middle East and more.