2013 is the lucky year for Singaporean Kiss Me because the Ubiquitous group, U-Kiss is back to Singapore with a concert held in The Coliseum, Hard Rock Hotel, Singapore. Before the event, a press conference was held. Sporting white outfit, U-Kiss entered the room and took their sit and the emcee started the press conference straight away:

Q: What do you miss the most in Singapore?
A: Singapore Kiss Me! The last time we came here, we promise to be back with a full concert and so we're back to fulfill the promise.

Q: How's the training and preparation for the concert?
A: It is pretty hectic and hard. We are working hard to show the best for the fans, and since AJ is back from his study leave, we have to rearrange the choreography and all to match back with us being seven members.


The boys then introduced themselves one by one starting with Hoon, followed by Dongho, Eli, Kevin, AJ, Kiseop and Soohyun. They greeted the media in various language including English, Korean, Chinese and Japanese and then they continue with the next question.

Q: What shall we expect for tonight's event?
A: We've checked out the concert and based on the stage arrangement, it would be a very intimate interaction with the fans and it will be a very hot stage tonight. 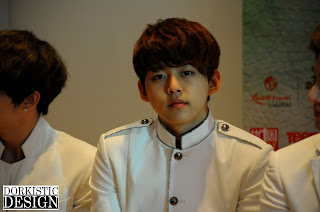 (Dorkistic.Net's crew got a chance to ask this question and upon knowing that we are from Malaysia, Eli and Kevin greeted "Selamat Datang")

Q: If all of U-Kiss get a chance to act in drama, what kind of character they would like to play?
A: Hoon would like to have a romantic character where he gets to be with pretty girls. He acted in a drama with Dongho before but the major characters are all male, so he would like act with female actors.

Q: How do you feel about your first stage in Taiwan
A: Since it is our first stage, we are a bit nervous and afraid of doing mistakes, but we want to be back and show a better stage in the future. 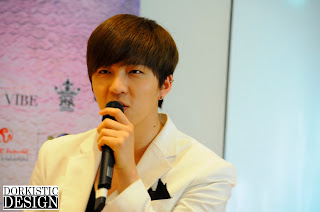 Q: To Soohyun, as a leader, do you face any challenge handling the members?
A: No at all. The members are very considerate and there's no problem with them.

Q: Other than being a singer, dancer actor, what would you like to do/to be?
A: Soohyun - Producer, AJ - campus couple, Kevin - a father, or a teacher, Eli - wants to go backpacking, Dongho - Radio DJ, Hoon - open a fitness centre

The pressconference ended by them bowing goodbye and get ready for the fansigning event which is held afterwards.

A huge thank you to Jigs Asia Entertainment for inviting us to the Press Conference. Click here for more photos