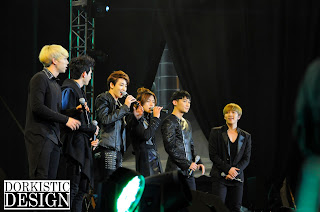 Twin Towers @live 2013 is back and this time, U-Kiss, was there as one of the acts alongside Demi Lovato, 2NE1 and Backstreet Boys. The third edition of the Tin Towers @live concert brought a full line-up of amazing performers from inside and outside Malaysia. Day-1 of the event was full with amazing acts including our very own Atilia, K-Town Clan, U-Kiss and Demi Lovato. Hosted by Natalie and Jinnyboy, the  concert goers already waited at the venue as early as 3pm and they have been enjoying themselves with DJ performance as well as dance-covers by our local dance-groups. The MCs were also given away lots of posters, CDs and bandanas for the audience through out the event, and free bottled waters were handed out to prevent the fans from being dehydrated.

U-Kiss was the fifth performers of the night as they started the stage with Neverland. And then they took turn to introduce themselves and welcoming back AJ after his short absence due to his study in Columbia University. Later on, they continued the stage with their latest song, Standing Still. Conquering the stage independently, Kevin asked the members to sing a little bit of their solo and duet songs from the album and Soohyun and Hoon sang their duet "Painful and Pain", and then Kevin with "You Are my Reason", and Soohyun's "Missing You", followed by AJ and Eli's "Party All the Time" and they even taught the fans to sing along the song with them.

Continuing their performance, U-Kiss performed overall of six songs, including 0330, Someday, Believe and lastly Man Man Hani before saying goodbye to the fans and promised to be back in the future.

On the second day of the Twin Tower @live 2013, even more amazing acts are on the list and this time, the crowds are three times bigger than the previous day, as 2NE1 and Backstreet Boys are performing on stage. 2NE1 who just arrived a few hours before the event doesn't even show their tiredness as they took over the stage as the 7th performer of the night with their debut song, Fire. Looking hot and pretty in black, Dara, CL, Bom and Minzy shows the real meaning of girl group with their next number, Can't Nobody. 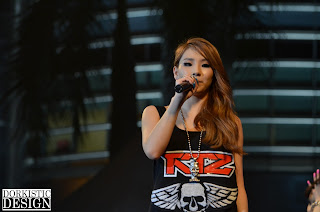 They were then joined by the night's emcees, JD and Dilly and they introduced themselves one by one followed by a surprise event of the night, which is the celebration of Bom's birthday.  After the celebration, they continued the stage with a slow number, Lonely followed by Ugly, and I'm The Best. The emcees even taught them how to say I Love Malaysia in Malay. They ended their stage with I Love You and hopefully they will be back for a full-concert or showcase of their own soon.

A huge thanks to the organizer at Twin Towers @live 2013 for the opportunity to over the event and for the warm hospitality. See you guys next year with more awesome acts on stage!