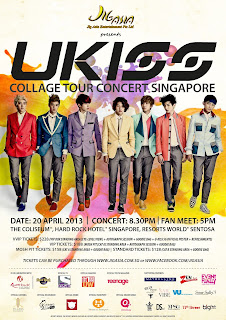 The name U-Kiss is no longer alien to Singaporean Korean music lovers. After 3 successful appearances in Singapore, U-KISS is back with us here once again with their first ever full fledged concert right here in Singapore. Back from releasing their latest Album ‘Collage’, U-Kiss (유키스) is here to wow their fans with their hit songs such as ‘Man Man Ha Ni’, ‘Shut Up!’ and ‘Neverland’. Also featuring their other hits ‘Believe’, ‘Stop Girl’ and ‘Alone’.

Together as U-KISS, Soohyun, Kiseop, Eli, Hoon, Kevin, Dongho and AJ is well-known to K-pop fans around the world. Since we last had them with us, they have been involved in a highly successful Sold Out concert tour dubbed as "U-KISS 1st Japan Live Tour 2012” which reached out to a total of 25,000 fans all over Japan.

Their recent comeback with a brand new album ‘Collage’ and title track ‘Standing Still’ was received with the anticipation of all the fans.

Their 6th mini-album, DoraDora also successfully gained the first spot on the German Asian Music Chart for the month of May 2012. The group also released their special album, The Special to Kissme with the title track Believe hitting the airwaves. Their 7th mini album "Stop Girl" was also received positively by their fans worldwide.

U-kiss are definitely no strangers to the television and silver screens as well. You may have also seen them in various variety shows, K-Dramas & movies with Dongho also recently featuring in the Korean movie ‘Don’t Cry Mommy’ which was released in the Busan International Film Festival 2012.

Jig Asia Entertainment the official organizer for their 2013 "Collage" Tour in Singapore and there will be an amazing night for Kiss Me since AJ is back in the team after his short hiatus due to his study. Belows are the details of the event:

Even though the VVIP and VIP tickets have already sold out, fret not because the MoshPit and Standard tickets are still available and you will get a goodie-bag for each purchase too!

U-Kiss is back to conquer the Asia. Malaysian fans, don't forget to get your passes to see U-Kiss in Twin Tower @Live 2013 on 22nd March 2013 and let's join us in Singapore too!