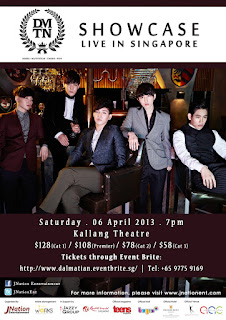 Good news come after another! The organiser of DMTN's Singapore Showcase, JNation Entertainment has announced the new price for all the tickets to see DMTN. Inati, Jeesu, Daniel, Simon and Donglim who recently made their comeback with new single "Safety Zone" are set to come to Singapore for a showcase to promote their single and the pre-order of the tickets has received overwhelming response from the fans not only from Singapore but also from Malaysia and Indonesia. Thus, there is new ticketing price for the event which is as follows:

No worries, for Fans who have previously paid for $168 or $118 will get the refund of $40 & $10 respectively after the showcase. Don't missed out to see DMTN performing their latest song in front of you and quickly get your ticket here!