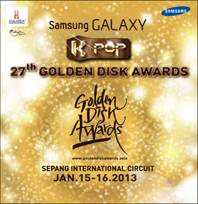 As officially announced before, The Samsung Galazy 27th Golden Disk Award will be held in Malaysia on the 15th and 16th of January 2013. To update you with the event, the organizer just sent us some of the confirmed idols who are coming to the event. There will be more than 20 idols coming to attend the award as performers as well as award receivers, of course. The organizer will release the attendees list part by part, so stay tuned to know who are the other idols coming for this prestigious awards.

The confirmed attendees are:

Meanwhile, to Malaysian fans of Korean Entertainment, you shall get your tickets fast before they were all sold out because this is no ordinary event - the Korean's very own Grammy Award is coming to our own country so we should all support them! Below are the details for the tickets: