[EVENT] VIXX 1ST Fanmeeting In M'sia: Get Ready for V, I Double X in da House! 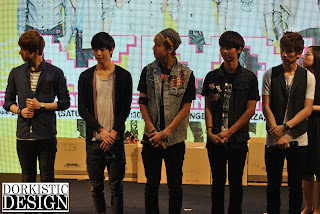 Rock Your Body cuz Vixx is having it first in Malaysia. Yes, it's true, after their hi-touch event in Japan, Malaysian fans is the next fans they having a hi-touch event with. After being invited to perform for a local music award, VIXX doesn't want to leave without having some of what I call a 'skinship' with their fans here. This is ain't exaggerating. Organized by PMP Entertainment (yes, they are local producer for most Korean/Japanese Drama you'd find at Speedy) the hi-touch fanmeeting with VIXX was held in Sungei Wang Plaza with full attendance by their fans.

Around 13.30, the fanmeeting started with VIXX belting out their latest single, Rock Your Body. Eventhough the stage is a bit lacking in its size, it didn't stop VIXX to rock it out along with the fans. The fanservice-studded event then continues with the interview session by the MC in which the questions are collected from the fans before the event started. Here are some tid-bids of what the fans have been asking VIXX during that day:

1) What do you think of Malaysia?
N: Malaysia is hot. (The MC then asked which one is, the whether or the fans) I mean, the fans

2) Since it's been 2 days since you are in Malaysia, any bahasa that you guys catched on?
N: Apa khabar
Ken: Bagus
Ravi: Cinta Malaysia?( Fans broke into the wildest wailing voice a fangirl can have)

3) What do you want to eat in Malaysia?
This question, there is some commotion where they wanted to talk at the same time so i can only heard something like nasi ayam or fried chicken.

4) What is you favourite activity during free time
Most of them said they love watching movies but weirdly, they didn't watch movies together.

5) Who is the best cook?
Ken and Leo, particularly ramen and bibimbap.

6) Mind showing us special talent?
Ken proudly presented his infamous animal sound imitation, from a chicken, dog and an elephant. The whole shopping mall echoed with the scream and spazz of the year
Ravi was freestyle-ing the most cool rap with a touch of his own style brings fascinating his fans particularly
When the MC asked all of them to do an aegyo, with hesitation, N asked the whole member to stand up and showing off what they got and to the dismay of Leo stan, Leo is being his cool self and refuse to join the troop flaunting their personal aegyo. Not letting Leo off the hook, all fans join venture chanting Leo's name to show off his aegyo and talent. Instead of doing a typical aegyo, Leo asked fans in freakin English: "What do you want?" and he serenade a beautiful ballad a human voice can produce.

Vixx then continue with the show by singing UUUUU especially for their fans. The fans can't ask for more when they were showered with the best fanservice Vixx can offer. From the heart sign straight to the I-phone, flying kisses on the air, V-sign can be seen everywhere, fans were left with remarkably awesome  idolmeeting event. 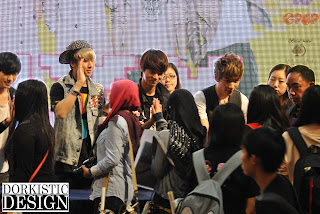 In commemeration of their 1st fanmeeting too, they were also invited to officialy launch M Countdown in local TV station, 8tv.  The show ended with the quick hi-touch session with  with the fans. VIXX indeed shower fans with their love and heart and left the fans impressed and speechless.