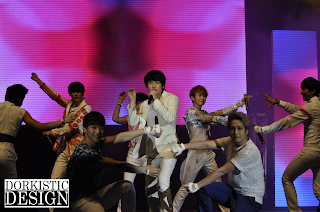 Keeping their promise to come back for bigger stage, the Children of Empire (ZE:A) once again invaded the land of Malaysia by having their second showcase in Kenanga Wholesale City, Kuala Lumpur. Organized by none other than our own Jazzy Group Companies, their second showcase here was a complete success, attended by 2000 fans. As promised by the boys themselves during the press conference in the morning, they are going to rock on stage with eventful night and magnificent performance. They also hinted the media that they will be also singing other artists' song, which the memory of them singing Orange Caramel song two years ago comes into my mind. Famous for their guerilla performances back in Korea, the boys sure always have something kept under their sleeves. However, to the dismay of the fans (especially me) not all nine of the members were able to come for the second visit. Their very own leader, MOON JUNYOUNG due to health reason, was absent and left the fans speechless. (I don't know if this is kind of thing that they keep under their sleeves too).

Nonetheless, forgetting their despair and broken-heartedness, the fans( when I said fans, kindly refer to me keke~) compensated with their kick-off song from their latest album, Body 2 Body. A dance groove, with killer moves (yes, it was a killer, I almost suffer from pneumonia) they really heighten up the atmosphere for the night. Right after that, the show continues with a cheerful number Watch Out and then Aftermath before officially greet their fans. During a talk with the MC, they we're asked to play pointing game where everyone needs to point to whoever they think fit the question.
Question asked during pointing game:
1) Among the members, who eats a lot?
-All members unanimously pointing to Hyungshik and he in fact point it to himself while saying he needs to eat a lot since he’s the tallest member. LOL
2) Of all members, who is the dirtiest?
-There's a commotion during this question, some point at Siwan, and some to Kwanghee. But then again, it was Hyungshik whom people voted, as he explains that he’s too busy to clean himself XD
3) Who is the cheapskate among members?
-Again, they were pointing to each other( I’m  glad they didn't break into a fight or else..) then one of them  ask fan to choose, then they choose Kwanghee
4) In ZE:A who is the crybaby?
-both fans and ZE:A themselves pointed at Taehun (yes, THE rapper) and the members also added that their Moon leader is also a crybaby. lmao

The second part of the pointing game was with the fans, the lucky fans whose number was picked by them will be playing “cham cham cham” game with respective member. Those who won the game against the boys were given a signed Spectacular CD, exclusive for them. For the record, being the king of fanservice themselves, they purposely lose against the fans to make them happy.

After coming back on stage with expected exquisite stage outfit, they continued with Someday...Become A Star, a soulful ballad track from their Spectacular album. The song is about dreams and hopes of becoming a star, which truly touched the hearts of the audience and surely made them teary eyes (I know tears is not the only fluid that gushing out by looking at how hot they are in that outfit, glad they didn’t wear suits or tux). Moving on with the fifth song of the night, they sang Never End followed by heart-wrenching track, All Day Long. 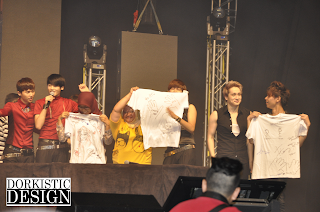 Next up is another memorable day for lucky fans who got picked by the 8 members. Those who were chosen to go up on stage will together design a white t-shirt with one ZE:A  member. Each member earnestly doodle the t-shirt specially for their fans. In the meantime, while waiting for each other to finish the customized t-shirt, Dongjun sang Forever Love to the fans, not forgotten Kevin who also serenaded the fans with his soulful voice. To the surprise of many, Minwoo too showing off his singing talent by belting out few notes from their own track, Daily Daily.

The night continues with them singing their promotion song, Heart For Two and their debut track, Mazeltov. Reminiscing their first visit here, fans cheered wildly and their fanchant filled the event hall and a louder chants echoed when they continued with their most anticipated latest single, Phoenix. Their voice and dance move surely a wonder, works like the tears from Phoenix (should read Harry Potter books to know what's this mean). The last game session now take place where there were 6 types of games to be chosen by the members and their partner by doing an archery. Kevin and his partner had to play a Korean traditional game and they lost but that was the luckiest lost to Kevin’s partner because she got ZE:A’s signed polaroids for each members T___T . Kwanghee, Minwoo, Hyungsik, Taehun and Heechul maybe secretly planned to kill all the not so lucky fans who didn’t get to be on stage with them by playing the staring contest. Each of them has to face their partner and those who blink their eyes first will lose. Seriously the boys reaction during the game could give me a major heart attack. While maknae Dongjun serenade to his partner which fluttered this unlucky noona. Heol siwan personally pointing his arrow to ‘palm pushing’? game. The naughty maknae pushed him forward which made Siwan accidentally hugged his partner that cause major injury to the other fans. Lol. All the lucky fans got to selca with the boys on stage using their own camera. I just can say that : THIS DIRTY WORLD WHO LOVES LUCKY PEOPLE ONLY. 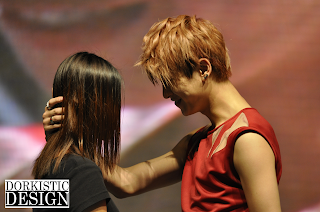 ZE:A’s prepared a surprise birthday celebration for Hyungsik which is 6 days earlier than his birthday. However, the surprise that come up with two birthday cakes and banners hold by fans written 'Happy Birthday Hyungsik’ lead the prince to teary eyes and being calmed down by his members. (OTP overload here! LOL)

Towards the end of the night, when the boys pretended to say goodbye obviously fans won't let them off easily. After a loud cheering demand for encore, they once again showing their special thanks and fanservice-to-die-for by singing My Only Wish. Closing up the night with remix version of Body 2 Body mashed-up with world-sensation Oppa Gangnam Style (this kinda killed my overflowing obsession towards my favourite jam Body 2 Body to be honest, but since they even sing that song, anything for you, ZE:A) . At approximately 10 pm, the curtain closed leaving the fans a moment to treasure that will last until the next K-Pop event. Added to that, this live showcase will be the last event organized by Jazzy Group for this year. Thanks to Jazzy Group that this year is full with K-Pop events ~!! what a year!

A huge thanks to Jazzy Group for bringing back ZE:A, TouchInSOL for the Doorgift (Moon Leader's Mask is so refreshing!) and Kenanga Wholesale City for an amazing night to remember!