Personally, today was not a good day for me, but when I logged in to my laptop later in the evening, I received an email from TeamComelet and wallahhh!!! They sent us a surprise gift! Seriously, I'm so happy and touched by their love towards Dorkistic.Net. As you can see right now, the layout has changed into a sexy one featuring the hottest Mr. Simple, Choi Siwon AND the icon is also featuring the fellow hottie, Yunho! pedomode! ngehehehehe~ How do you like the layout? I like it sooo much! I think I'm going to stick with this layout for a while until I come out with a new one later. You don't know how hard I've been trying to make a new layout for DD since the new domain but I can't seem to find a good design for it (I will end up hitting the "delete" keys most of the time) and I am so thankful that this layout was sent in my inbox. Guys, go visit them because TeamComelet is awesome!

I'm currently uploading the new page that I've been working on for a few months already. I think I should publish the page now rather than waiting because I don't know when will I have the time to do it again later ^^

Oh, you should also visit Nekonette because Kitty is the angel behind our new domain ^^


And with that, we are proud to feature them again on our Site of The Day section! 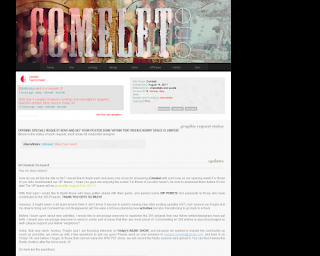 We have a new page! It is called Dorkistic's Link Button Maker!. Wondering what is that? Click Here